What’s happening to us?

Posted on September 28, 2013 by The Inspired Nester 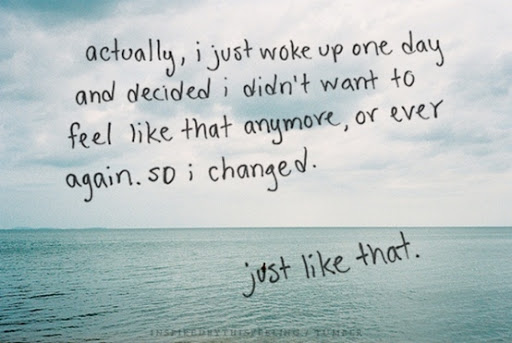 Sitting in the waiting room at the doctor’s office recently I came to a realization, one that I already knew but in that instance it really hit home-we are on our smart phones too much. I looked up from my phone (I admit I was on Pinterest) and was shocked, horrified, saddened to see EVERY SINGLE PERSON in the packed waiting room-with the exception of a toddler, had their heads down and was on their phone. Magazines? Conversation? Things of the past. Yes, I had a wake up call. One of many actually, but one that’s made me rethink how much I use technology (this being said as I am writing a blog on a computer, for the internet so people can read on that very technology ). We go through the day with our head down, focused on a screen instead of what’s around us. Whether it’s beauty, our loved ones, experiences in general are with a sense of detachment as our minds are elsewhere.

This video had me going “Yes, been there. Yup, done that. Yes, experienced that”….and I felt sad as I watched it.

Many times I’ve been out for dinner with a small group and I’ve looked up from my meal to see everyone on their phone. Jokes have been made that we should text each other to have a conversation (which could work in a loud restaurant with bad acoustics haha, but really- call it what it is…VERY rude). 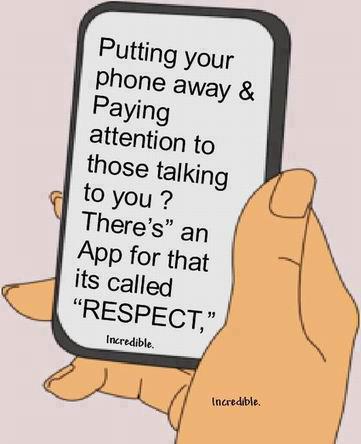 Idea’s to get socialization during visiting hours back on track:

Stack the phones—whoever picks up to check, pays the bill (this one will be hard for me as I like to take pictures of the food 😛 ) 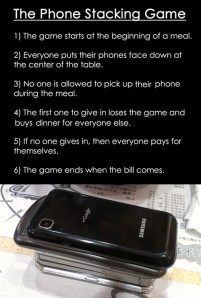 Basket for phones waiting at the front door where people can leave them when visiting….new rule at our house! 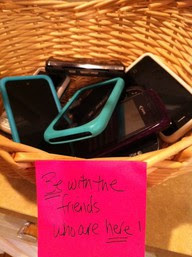 I’ve started to take a self imposed hiatus from the computer and smart phone limiting my time on them. I’m trying to do the same with the tv but jeez………with the new Fall Season starting up that one’s going to be a tuffy! Me, the voracious reader I used to be is no longer. I used to be able to read a book in a few hours, now it takes me months as I’ve gotten away from the joy of reading and let my time get eaten up by the Black Hole also known as the internet. My OCD self knows that my ability to spell correctly has dropped significantly and I’ve joked that I’ve “dumbed down” a lot. It’s no joke. It bothers me as I feel my brain has gone mushy from lack of use because I’ve become lazy as it’s easy to start typing a word and let it get filled in automatically, or do a math calculation on my phone instead of giving my brain the exercise it craves.
Since my big eye opener, I’ve picked up more books this past month than I have in the last 3 years!!!! I’ve started to use Lumosity when I do go on my smart phone and am in a line up. Although now I am also making an effort to revert back to my old ways and smile and maybe start up a conversation with people that are in the line with me. Small changes in what’s become a habit.

I hope to pass this same thought on to some of you as our culture is also breeding kids that have lost the ability to play. I’ve seen it and I’m sure you have as well. 😦 It’s a sad thing when you have to tell kids to go outside and play …..”I remember when” we were whining when we were made to come IN!

and another good one…..

I can’t say it enough. BE IN THE MOMENT. YOUR moment. 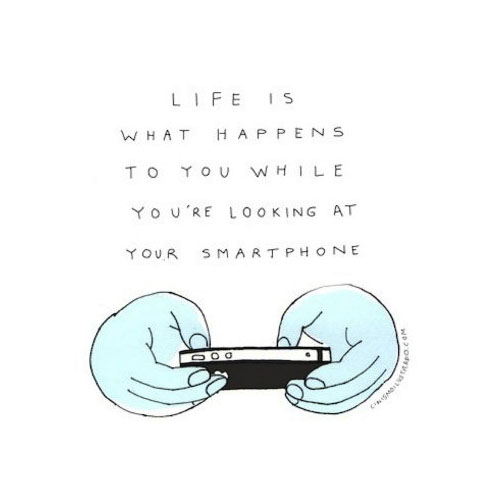 Don’t miss out…..make sure to look up and BE in your life!

Travel gives me inspiration, yet home needs to be a sanctuary. Live in what you love ♥
View all posts by The Inspired Nester →
This entry was posted in Life Journeys, Quotes, Technology, Video, World and tagged Communicating, Culture, Interaction, Life, Smart phone, Social skills, Socialization, Society. Bookmark the permalink.

2 Responses to What’s happening to us?